Symptom finder - The causes of vomiting 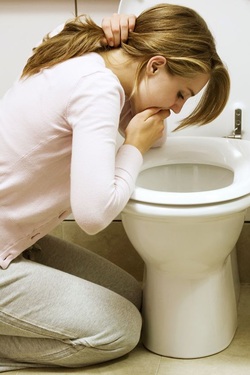 Symptom finder - The causes of vomiting

Central vomiting are caused by metabolic or endocrine disorder such as Addison’s disease, hypercalcemia, diabetic ketoacidosis, uremia and pregnancy, acute infection in children and drug such as chemotherapeutic agent and narcotic analgesic.

History taking should focus on time of vomiting, nature of vomiting and associated features . Vomiting that occur early in the morning is due to pregnancy. Vomiting after series of coughing is due to chronic chest infection while vomiting that occur soon after meal is due to gastric carcinoma and gastric ulcer. Projectile vomiting and vomiting consist of food several days old or recently eaten food is due to pyloric stenosis. Feculent vomit is an indication of large or low small bowel obstruction and bile containing vomit is due to high small bowel obstruction. Bleeding peptic ulcer is presented with vomit which is consist of bright red blood. Pain from peptic ulcer disease relieved by vomiting.

Careful hsitory of central nervous system is important. Migraine is usually present with photophobia, unilateral throbbing headache and visual aura. Meniere’s disease may last from minutes to hours. Meniere’s disease consists of deafness, tinnitus  and vertigo. Tinnitus will precede other symptoms by a few months. Meniere’s disease usually last from few minutes to hours. Hearing defect, vertigo, nausea and vomiting are commonly present with labyrinthitis. Vomiting, headache, drowsiness and fits are due to raised intracranial pressure. History of motion sickness may also be taken.

History taking in gastrointestinal system should focus on any colicky abdominal pain or localized tenderness of peritonitis. Check for any drug which is irritant in nature as aspirin or any emetic abuse in cause of bulimia.

Psychogenic condition such as hysteria may also lead to vomiting. Besides that bulimia or eating which is followed by self induced vomiting may also form part of psychogenic cause of vomiting. Anorexia nervosa may also cause vomiting besides failure to eat. 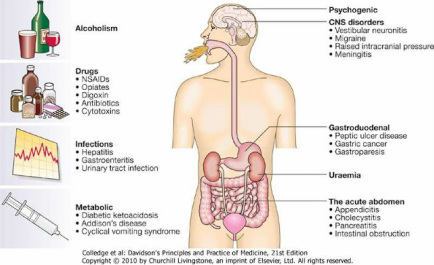 There is also should be history of severe pain in the chest in myocardial infarction or severe pain due to trauma or testicular torsion. Any fracture will be obsvious. Patient may also present with chronic chest infection such as bronchiectasis or bronchitis which is associated with bouts of coughing that follow with vomiting. Any malignant disease or radiotherapy due to malignancy may also cause vomiting.

Central vomiting is obvious in patient who take chemotherapeutic drug or pregnancy and children who suffer from acute infection. Blood test is useful in identifying metabolic and endocrine disorder.

On examination, patient may appear hypertensive , bradycardia, drowsy, irritable or listless in case of raised intracranial pressure. Irregular breathing, papilloedema and coma may occur later. Nystagmus to the opposite of lesion is an indication of acute labyrinthitis.
The fistula test is positive if pressure on the tragus cause vertigo or reducing movement of the perilymph cause deviation of the eye. Purulent labyrinthitis , may cause sensorineural deafness, past pointing, unsteadiness of gait and stance during attack and rotatory nystagmus is associated with Meniere’s disease.

Gastrointestinal examination is performed to look out for any signs of intestinal obstruction ( include sign of local tenderness). Wasted hirsute female with anxious parent is an indication of anorexia nervosa. Vomiting accompanied by severe pain is examined by localized the site of pain ( testicular torsion or trauma will cause the pain in the scrotum). Signs of acute congestive cardiac failure provide an indication of myocardial infarction.Look at the skin for any signs of irradiation as an evidence of patient who undegoes radiotherapy treatment. Cachetic is a characteristic of patient with malignant disease. Severe coughing is an indication of chest sign.

Biliary tract disease is confirmed with liver function test. Pancreatitis is evaluated with serum amylase. Urinalysis may reveal the present of protein or white cell count which is suggestive of urinary tract infection or the present of ketones and glucose which is indicative of the present of diabetes. The present of blood in the urine may be caused by kidney stone.

Abdominal x ray is useful for detection of any sign of obstruction , while chest x ray may be suggestive of bronchiectasis , pneumonia or pulmonary edema ( congestive cardiac failure ). ECG is performed to rule out myocardial infarction.