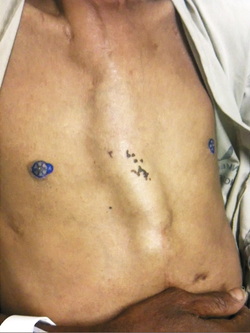 The important points to elicit while taking history from patient include past history of chronic gastritis, stomach cancer or pyloric ulcer. Point out any condition such as gallstones, polyps and tumors of the intestine , hernia or chronic constipation which lead to intestinal obstruction. The patient may have previous surgery to the abdomen . Patient with colicky abdominal pain may suffer from pyloric obstruction while patient with spasmodic abdominal pain may suffer from small bowel obstruction. Ask the patient regarding any episodes of vomiting and the nature amount and consistency of the vomit. Brown or green vomitus contain fecal or bile. Undigested food particles suggestive of lumpy vomitus.

Patient’s abdomen is inspected for any visible loops of bowel , adhesion, surgical scars and abdominal distention. The bowel is auscultated and listened for any high pitched tinkling sound. The patient is rolled from side to side and auscultate for a splashing sound in the stomach ( succussion splash)  from secretion from pyloric obstruction. The abdomen is palpated for tenderness and rigidity. Percuss for tympany. Look for any evidence of dehydration such as poor skin turgor and dry skin and mucous membrane. Hypovolemia is suggestive by hypotension and tachycardia.