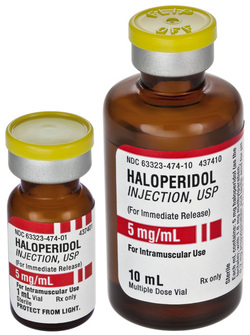 Anti psychotic agent is useful in treating delirium, schizophrenia (positive signs such as hallucinations and delusion), agitation and in some cases for the treatment of Tourette’s syndrome.

Anti psychotic agent will block the dopamine D2 receptor on the postsynaptic region of the limbic area of the brain.

As a result this will reduce the post synaptic neuron response to excitation of dopamine.

Patient may suffer from extrapyramidal side effect due to the blockage of the dopamine system. The common symptoms and signs are tardive dyskinesia or involuntary facial oral movement, muscle spasm ( acute dystonia), motor restlessness or akathisia or akinesia due to loss of voluntary movement and amenorrhea as well as galactorrhea due to raised level of prolactin as a result of inhibition of the release of dopamine from pituitary gland.