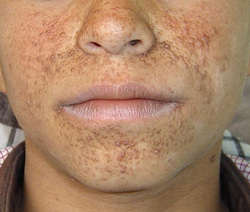 Tuberous sclerosis is an autosomal dominant disorder which present with signs and symptoms such adenoma sebaceum on the face( red nodules on the face) and neurological disturbance such as mental retardation and seizures. The treatment is usually symptomatic treatment.

Tuberous sclerosis may occur as a result of mutation of several different genes.

There will be a series of neoplasms/tumors that may occur in the central nervous system as well as other sides such as the renal system ( renal angiomyolipomas) which consists of lesion that include smooth muscle, adipocytes and malformed blood vessel and the facial feature which leads to the development of the red nodules due to the malformed blood vessel. This is known as adenoma sebaceum of the face which present at 5 - 12 years old.  Tuberous sclerosis may also affect the cardiovascular system through the formation of cardiac rhabdomyomas.  Tuberous sclerosis is affecting the central nervous system through the development of the brain hamartoma. Brain hamartoma is presented as firm nodule. The firm nodule is presented in the cerebral cortex and consists of neurons, cytoplasm of eosinophil and large vesicular nuclei.