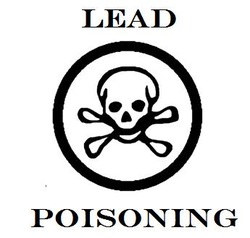 Lead poisoning is initially treated by making the patient’s airway, breathing and circulation stable. The airway and breathing need to be supported. Cardiac monitoring is performed and seizures need to be controlled. If dermal exposure is suspected, consider skin decontamination. Remember to bring the container containing the lead if present.

Patient required decontamination therapy. The indication for decontamination therapy include the present of opacities of the upright of the abdominal film. The treatment include whole bowel irrigation of polyethylene glycol 1-2 liters per hour. Next consider chelation therapy. Chelation therapy is based on the presentation of symptoms and level of exposure. The chelation therapy include 5 days of British Antilewisite ( should be avoided in case of peanut allergy). This is follow later with treatment with calcium disodium ethylenediamine tetra - acetate. Asymptomatic patient may be treated with dimercaptosuccinic acid ( DMSA)  and oral chelating agent.

Benzodiazepine is considered in treating seizures while thiamine, naloxone and dextrose are considered in case of altered mental status.

Normal lead level is less than 10 mcg/dl. 40 - 50 mcg/dl level is commonly associated with symptomatic patient in acute setting. 70 mcg/dl commonly present in chronic level poisoning. If the level of lead is more than 100 mcg/dl, patient may present with defect in cognitive function and severe encephalopathy. The higher the level of lead in the blood the severe the symptoms.

The common causes of lead poisoning are due to ingestion of substance with high level of lead such as folk remedies or home distilled alcohol beverages. Lead poisoning may also occur due to exposure in the environment such as jewelry, pottery glaze,inhalation route ( bridge painting, de leading or smelting). Contaminated food or drinking water and ingestion of lead paint by children may also lead to lead poisoning.

Lead will interfere with the cell signaling process by replacing calcium ion ( Ca2+)  and interrupted the calcium dependent process. High level of lead may enter the central nervous system which later lead to neurotoxicity. High concentration of lead in the blood may compromise the blood brain barrier. Lead poisoning may affect multiple enzymatic process by binding to the sulfhydryl groups. Lead poisoning may also lead to elevation of zinc protoporphyrin due to increase in the number of erythrocyte protoporphyrin which complex with zinc as a result of failure in heme synthesis. Most of the lead will be bound to erythrocyte after being absorbed before finally distributed into the bone. Iron deficiency is associated with lead poisoning which lead to an increase in lead absorption.