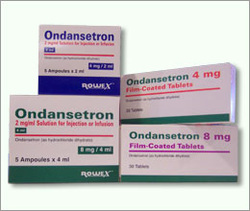 Ondansetron will block 5 HT3 receptors. 5HT3 receptors present in the brainstem at the chemoreceptor trigger zone ( vomiting reflex pathway) and in the lining of the gastrointestinal tract. In normal circumstance the 5HT 3 receptors will be activated from the release of the serotonin from the damaged by enterochromaffin cells. A signal will be sent to the brainstem  through vagus nerve which activates the vomiting reflex pathway. The common side effects of ondansetron is headache.

Prochlorperazine may also acts as dopamine antagonist for D2 receptors. The common side effects of prochlorperazine are sedation, extrapyramidal symptoms and hypotension.