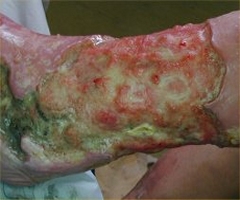 Leg ulcers are common disorders. An ulcer is described as a disruption in the continuity of the epithelial surface. The causes of leg ulcers are divided into neoplastic causes, infective causes, hematological causes, autoimmune causes, neuropathic causes and vascular causes.

An ulcerated pigmented lesion that rise at the sites of previous mole or rise de novo will suggest malignant melanoma. This is supported by the facts or history of excessive exposure to the sun. History of subacute bacterial endocarditis , atrial fibrillation and intermittent claudication are highly suggestive of ischemic ulcers. Venous stasis ulcer is associated with deep vein thrombosis and varicose vein. Marjolin’s ulcer is a condition when there is a neoplastic change of the existing benign ulcer. An example include the development of squamous cell carcinoma from long standing episodes of venous ulcer that undergoes morphological changes. Vasculitis lesion is associated with collagen disease or rheumatoid arthritis. Crohn’s disease and ulcerative colitis are associated with pyoderma gangrenosum. Painless ulcers are associated with diabetes mellitus or tabes dorsalis which are known as neuropathic causes. Painful ulcer may be due to trauma ( self inflicted in some case), ischemia or infection.

The base of the ulcer carries a significant finding on the underlying causes. Arterial ulcers are deep ulcers which punched out with periosteum or tendon in the base. This arterial/ischemic ulcers consists of black necrotic tissue with no granulation tissue. Tendon or bone are visible in the base. Syphilitic ulcers may resemble wash leather ( slough in the base). As a conclusions, the base of the ulcer consists of either slough or granulation tissue.

Ulcer consists of five edges. The edges are undermined edge due to tuberculous ulcer, a slopping edge ulcer due to venous stasis ulcer/healing ulcer, everted edge ulcer is due to squamous cell carcinoma ( malignant ulcer), punched out edges due to syphilitic gummatous ulcer or ischemic ulcer and rolled edge ulcer due to rodent ulcer.

The diabetic neuropathies ulcers present at the point of pressure such as under the toes, under the head of the fifth and first metatarsal and under the heel. Callosities are associated with diabetic neuropathic ulcer. Arterial ulcer and diabetic ischemic ulcer present over the lateral aspect of the head of the fifth metatarsal, on the tips of toes, between the toes and around the heel as well as over the metatarsal heads. Venous stasis ulcer will present over the medial malleolus ( medial aspect of the lower third of the leg).

Observe the surrounding skin and look for any evidence of malignant melanoma ( black satellite lesions) or healthy pink skin with normal innervation. Observe for any absence of the pulse or present of the bruit, varicose vein or deep vein thrombosis. Any unresolved ulcer due to trauma is associated with steroid therapy, malnutrition or poor circulation. Observe the patient for evidence of rheumatoid arthritis . Ulcer may also develop due to minor trauma. This ulcer is usually occur over the shin of the thin skin. This ulcer is slow to heal due to poor support from the periosteum of the bones. Multiple ulcers with pustules in patient with inflammatory bowel disease are known as pyoderma gangrenosum.

The investigations require are full blood count, urea and electrolytes, ESR, swab of ulcer, blood glucose, arteriography, venography, biopsy, doppler studies, VDRL, antibody screen and rheumatoid factor.
Raised white cell count is suggestive of infection. Low Hb level is due to malignancy or hematological disorder. Urea and electrolytes studies are useful in cases of involvement of renal system in autoimmune disease. ESR is raised in vasculitis, syphilis and tuberculosis. Culture and sensitivity test for swab of ulcer is useful to identify the etiology . Blood glucose may reveal diabetes mellitus.

Doppler studies may assess the present of venous disease and arterial disease. Arteriography is useful to assess the arterial system. Venography is considered in assessing the venous system and identify ant varicose vein and patency of the deep vein. Excision biopsy is useful in suspected malignant melanoma. Incision biopsy is considered for squamous cell carcinoma or unclear ulcer. Syphilis is identify by VDRL. The present of rheumatoid factor and ANCA ( antibody screen) are useful for identification of rheumatoid arthritis or SLE.