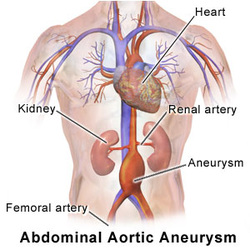 Abdominal aortic aneurysm maybe asymptomatic or present with signs and symptoms such as pulsating painless mass on the abdomen. Imaging technique may reveal the present of double lumen on the aorta.

There are few forms of aneurysm which may include syphilitic aneurysm, inflammatory aneurysm and hereditary form of aneurysm.

In emergency setting such as during the rupture of the abdominal aortic aneurysm, the patient may complain of severe abdominal pain which is tearing in nature that radiates to the back.