​Acne Rosacea Causes
Acne Rosacea is a chronic condition. It is characterized by recurrent episodes of faical flushing, pustules, papules, erythema ( due to dilation of small blood vessels in the face), and

Telangiectasia ( due to increased reactivity of the capillaries) in a central, symmetrical facial distribution. Rosacea may be associated with ocular symptoms.

There are four subtypes of rosacea. These include erythematotelangiectatic rosacea, papulopustular rosacea, ocular rosacea and phymatous rosacea.

Acne rosacea may present with chronic inflammatory dermatosis with middle age onset. The side effects of aging may be associated with oral isotretinoin.

Predominantly, the age of onset of rosacea is between 20 to 50 years old. It is more common in females than males. However, males are at a greater risk of developing rosacea at a later age. Rosacea is common in individuals with Fitzpatrick skin types I and II.
The etiology of rosacea includes disturbance of the thyroid and sex hormones, exposure to cold or heat, dysfunctional gastrointestinal tract due to Helicobacter Pylori, emotional stress and dermodex follicular parasites. Alcohol, tea and coffee as well as spicy food over indulgence may also lead to rosacea.

Patient with rosacea may present with history of episodic flushing with increase in skin temperature due to hot liquids, alcohol, spicy foods and sun exposure. Rosacea may be preceded with the onset of acne by years. However, in certain cases, rosacea may appear de novo without preceding history of seborrheic or acne. Patient with rosacea may typically complain of excessive facial redness and warmth.
There are four subtypes of rosacea. These include rosacea diathesis, erythomatotelangiectatic rosacea, papulopustular rosacea and phymatous rosacea.

Other general signs elicited on physical examination include inflammatory papules, telangiectasia and pustules, facial erythema on nose, cheek, chin and entire face. Unlike acne vulgaris, comodones are absent. Lesion is commonly present on the nose of the men and lesion on the cheeks and chin most commonly occur in women. In 50% of patients there are ocular findings, such as eyelid inflammation and swelling, mild dryness and irritation with blepharitis, conjunctival stinging, burning, injection and tearing.

Diagnosis is based on physical exam findings. Histological analysis of the skin of the patient with rosacea may reveal granulomatous inflammation, vascular dilation and infiltration of dermal lymphocytes, blocked ducts and absence of comedones and inflammation around hypertrophied sebaceous glands, producing cysts, pustules and papules.

The treatment may include general measures, and 1st and 2nd line of medications.
The general measures of treating rosacea include photo protection and proper skin care. It is recommended to use mild non drying soap and avoidance of triggering factors and local irritants. Psychological stress should be avoided. Avoid any oil based cosmetics and topical steroids. Considered chemical sclerosis of permanently dilated blood vessels or electrodesiccation. Patient need to be reassured that rosacea is unrelated to poor hygiene.

The 1st line of medication include topical metronidazole preparations one or twice daily for 7 – 12 weeks. Rosacea treatment system include metronidazole 0.75% gel, cleanser, sunscreen SPF 30 and hydrating complexion corrector. Azelaic acid ( Finacea) is useful for initial therapy. A topical Azelaic acid alone is effective for maintenance. Other medications include topical ivermectin 1% cream, which is effective in treating papulopustular rosacea and topical brimonidine tartarade 0.5% gel which is considered in reducing erythema due to erythematotelangiectatic rosacea. Alpha -2 – adrenergic receptor agonist is useful as potent vasoconstrictor. In case of persistent erythema due to rosacea in adults, oxymetazoline 1% cream which is alpha adrenergic receptor agonist is considered.

40mg of Doxycyline is effective and carries lower risk but it is expensive. Nevertheless, it may cause photosensitivity and therefore it is recommended to sue sunscreen. Doxycycline may also interact with antacids, iron or dairy products.

The treatment of using broad spectrum antibiotics may also reduce the effectiveness of oral contraceptive.

Second line of medications include topical erythromycin and topical clindamycin. Topical clindamycin is used with combination of benzoyl peroxide. Others include calcineurin inhibitors ( pimecrolimus 1% and tacrolimus 0.1%) and permethrin 5% cream. Pimecrolimus 1% is effective in treating mild to moderate inflammatory rosacea. Permethrin 5% cream is similar in terms of efficacy with metronidazole.

The use of doxycycline ( tetracycline) is avoided for children under 8 years old and pregnant women. Isotretinoin is also avoided due to its
teratogenic nature.

In case of ocular rosacea, cyclosporine 0.05% ophthalmic emulsion is effective.

Laser treatment is considered for rhinophyma or progressive telangiectasias. These include pulsed dye laser ( 585nm or 595nm) and CO2 fractional ablation laser for treating rhinophyma.

​Alcohol and hot drink of any type should be avoided. The complications of rosacea include blepharitis, conjunctivitis, keratitis, visual deterioration and rhinophyma. Rhinophyma typically present in man and characterized by dilated follicle with thickened bulbous skin on the nose. 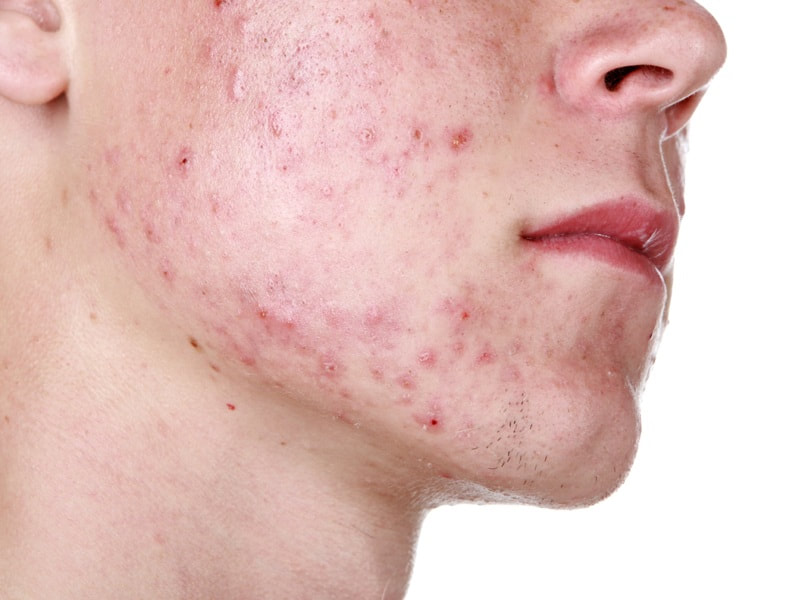