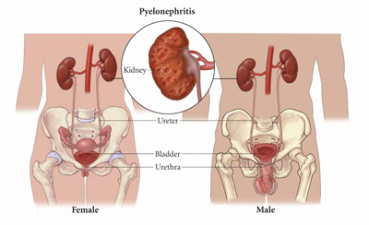 Acute pyelonephritis may affect the renal cortex while sparing the glomeruli. There will be formation of abscess ( which may rupture and leads to the infiltration of the white blood cells into the lumen of the tubule) and infiltration of the neutrophils within the interstitium of the renal.

Chronic pyelonephritis may present with recurrent episodes of acute pyelonephritis. It is presented with asymmetrical scarring of the corticomedullary. The tubules will contains proteinaceous casts which resemble the appearance of the thyroid follicle. There will be interstitial fibrosis and tubular atrophy at the later stages.

The common complications of chronic pyelonephritis are renal hypertension and end stage renal failure. The treatment will focus on renal transplantation in case of developing end stage renal failure. Chronic pyelonephritis is commonly caused by recurrent urinary tract infection or chronic obstruction of the urinary tract. There will be white blood cell cast in the urine.