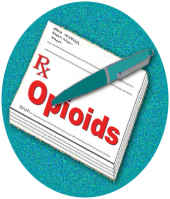 Opioid poisoning is confirmed based on the symptoms and signs as well as rapid symptoms to naloxone. The treatment required in treating opioid poisoning begins with opening and protecting the airway ( important to prevent aspiration in comatose or semi comatose patient while performing gastric lavage or activated charcoal for decontamination), assisting ventilation , providing oxygen and improving the circulation . Treat specific features that accompany opioid poisoning such as hypotension, coma , seizures and non cardiogenic pulmonary edema. Opioid will induce delay in gastric emptying. It is advisable to consider activated charcoal or gastric lavage up to 12 hours if the opioid is orally taken.

Competitive opioid antagonist such as naloxone is considered in cases of overdose of opioids. Besides that, combination of central nervous system depressant, alcohol with opioid can also be treated with naloxone. Naloxone can be given in the form of IV , intramuscular or subcutaneous injection. 0.4- 2.0 mg repeated dose of IV naloxone ( due to short duration of action), is consider at interval 3- 5 minutes to achieve 15 per minutes respiratory rates. Other diagnosis is consider if the respiratory rate is not improving after maximum dose of naloxone 10mg is given to the patient. Naloxone also can be given as continuous infusion based on 2 mg naloxone dilutes in 500 ml of D5% or normal saline solution at a rate of 100 ml/hr.

In case of developing pulmonary edema, consider intermittent positive pressure ventilation. Diuretics are useless as pulmonary edema occur due to pulmonary capillaries leakage and not from the overload of fluid. Dopamine is considered if the patient developing oliguria or hypotension.

Nasal congestion, tremors, diarrhea, dilated pupils, sweating, abdominal pain as well as pilo erection are common  acute withdrawal symptoms which develop in chronic narcotic abuse. This is treated by titrating the dose of naloxone beginning with low doses of 0.05 mg of naloxone to prevent this. Signs such as hypertension, tachycardia, rigidity, tremor and hyperventilation are common signs of over treatment.

So what is opioid? Opioid is analgesic and include hydromorphone, codeine, oxycodone, morphine, methadone and pethidine. The common clinical features of opioid poisoning are respiratory depression, pin- point pupil and come. However, opioid overdose may not always cause pin point pupil /constriction of the pupil. Other complications of opioid overdoses are pulmonary edema, hypoxia, bradycardia, hypotension, acidosis, renal failure, hypothermia and convulsion.