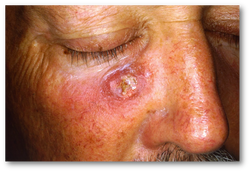 Squamous cell carcinoma of the skin

There are three different variants of squamous cell carcinoma. The first variant is the precursor lesion known as actinic keratosis. Actinic keratosis is scaly red lesion which is poorly defined and may form cutaneous horn type of lesion. Histologically, there will be intracellular bridges, hyperplasia of the basal cell as well as cellular atypia and parakeratosis.

The second variant is in situ carcinoma. In situ carcinoma means that squamous cell carcinoma of the skin will not invading the basement membrane. There will be keratin pearls and hyperkeratosis. It is a red well defined scaly lesion in the form of ulcerated nodules or plaque. Histologically there will be cellular atypia at epidermis.


Squamous cell carcinoma of the skin mostly occur as a result of exposure to ultraviolet light, immunosuppression, exposure to tars or radiation, arsenic , tobacco smoking, or genetical disorder known as xeroderma pigmentosum. Xeroderma pigmentosum is an autosomal recessive disorder. This disorder may lead to defect in the gene that is involved in the nucleotide excision repair. The nucleotide excision repair is required to repair the pyrimidine dimers which is formed by ultra violet light exposure.