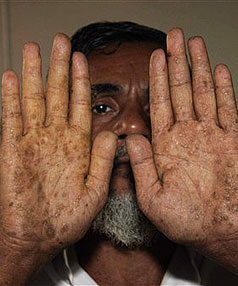 If it is possible, bring the container which contain the arsenic along with the patient who is suspected to suffer from arsenic poisoning.

Cardiac monitor is essential. Observes for any prolongation of QTC interval. QTC interval may be exacerbated by type 1A antidysrhythmics. Neurological treatment may include treatment for seizures and consider thiamine, Naloxone or D5W dextrose for alteration of mental status. Neuromuscular weakness may also contribute for respiratory insufficiency . Assisted ventilation is required in this case. Renal therapy such as hemofiltration is only consider in cases of renal failure and forced urine alkalinization is consider for rhabdomyolysis.

Patient who is symptomatic is treated in the intensive care unit. Patient who is asymptomatic will be discharged if spot urinary arsenic level is less than 50 microgram per liters. 24 hour urinary collection and outpatient evaluation are considered if admission is not required and patient is suspected to suffer from chronic exposure .

Patient with arsenic poisoning may present with nausea and vomiting unresponsive to antiemetic ( refractory and protracted) , hemorrhagic gastroenteritis ( which is corrosive to the alimentary tract), pain in the abdomen, portal hypertension, stool, vomit, breath ( garlic odor) and acute hepatitis as well as rice water diarrhea.

The symptoms and signs of cardiovascular system are ventricular dysarhythmias, hypotension, non cardiogenic pulmonary edema , non specific changes of the ST segment and prolongation of the QTC interval.

Full blood count may reveal basophilic stippling ( blood film), leukopenia and anemia. Urea and electrolytes, glucose and creatinine as well as blood urea nitrogen are also considered. Due to short half life ( 2hrs), blood level measurement is not considered. Urinalysis is considered  for identification of rhabdomyolysis/hemolysis. Creatinine phosphokinase is also useful for detecting rhabdomyolysis.

The diagnosis of arsenic poisoning is confirmed with spot urine arsenic level of more than 1000 microgram per liters. 24 hour urinary collection is also considered. Chronicity of arsenic exposure is determined by arsenic level of the hair and the nail. Radiopacity of the foreign bodies are detected on the plain abdominal radiographs.

The most common causes of worldwide arsenic poisoning are contaminated water and food supplies. This fall under the category of chronic toxicity along with occupational exposure.

Besides that acute exposure of sodium arsenate are mostly common due to exposure to ant killer. Intentional ingestion of arsenic are also common cause of arsenic poisoning. This condition usually known as acute toxicity which share similar situation as error in medication prescription or malicious poisoning . Toxicity/ poisoning may also occur due to inhalation of arsenic gas. ( from combustion of arsenic containing compound and zinc).

Besides the toxicity effect, arsenic such as arsenic trioxide is useful as part of chemotherapy against acute myelogenous leukemia. Arsenic is also found as anti trypanosomal agent in developing countries ( melarsoprol ) folk remedies ( herbal balls) and home remedies.