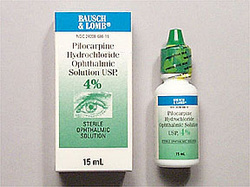 Pilocarpine may also cause the contraction of the ciliary muscle which cause the opening of the trabecular meshwork and increase in the outflow of the aqueous humor. This is useful in treating patient with wide angle glaucoma.

Pilocarpine may carry its own side effects such as sweating and salivation.