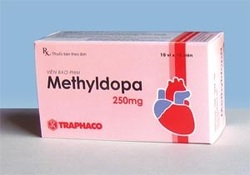 Methyldopa is useful in treating patient with hypertension. Methyldopa will acts at the alpha 2 receptors as alpha 2 agonist. The alpha 2 receptors present in the vasomotor centre of the medulla.
There will be a release of noradrenaline with reduction in the release of other forms of neurotransmitters. This will lead to a decreased in the activity of the  central adrenergic system and finally cause a reduction in cardiac output and reduction in vasoconstriction.

Methyldopa is useful in hypertensive patient with renal disorder as methyldopa does not decrease the renal blood flow.

The common side effects of methyldopa are orthostatic hypotension, dizziness and sedation.