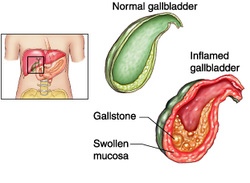 Acute cholecystitis commonly present as edematous thickened wall of the gallbladder with infiltration of the inflammatory and vascular congestion. The gallbladder appears large and discolored. There will be a purulent or cloudy bile in the lumen. The stone may obstructing the neck of the gallbladder.

Chronic cholecystitis may present with signs and symptoms such as intolerance to fatty food, colicky right upper quadrant pain which is recurrent in nature and nausea as well as vomiting.

Cholecystitis is treated with antibiotics and cholecystectomy.