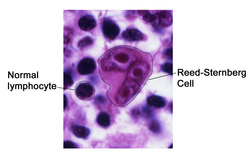 The prognosis of Hodgkin lymphoma is good with high percentage of cure rate if there is absence of fever, night sweat, loss of weight and no disseminated disease as well as histological variants consists of nodular sclerosis and lymphocytes depletion.