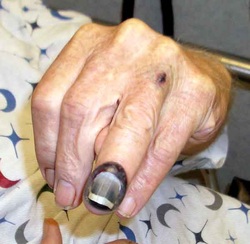 
In an acute setting ,, patient will complain of localized pain as a result of injury to the finger and toe, Neglected nail bed injury will lead to deformity of the nail. The hematoma is usually visible thorugh the nail plate. Diffuse swelling of the digit tip is an indication of the fracture of the distal phalanx. Plain film ( imaging test) is useful to rule out any fracture of the distal phalanx. 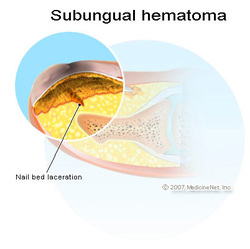 The differential diagnosis are subungual melanoma ( especially when the history of injury is unclear) ,fracture or contusion of the distal phalanx with no formation of hematoma and perforation of the base of the nail caused by cuticle scissors. ( pyogenic granuloma which affect the base of the nail).


Treatment for subungual hematoma less than 50% may include initial sterile preparation of the nail. Hot needle or cautery is useful to decompress the subungual hematoma with the aim for pain reliever. It is not always require to anesthetize the finger. Hematoma  may be drained by trephining 1-3 holes in the nail of the area that is affected. This procedure can be performed with a battery powered cautery such as opthalmic cautery , 16 gauge needle or a heated paper clip with the patient presses the finger firmly against a hard surface.Prompt relief of the pain can be achieved  by drainage. If the subungual hematoma is more than 50% and fracture is present, the treatment may include removal of the nail plate to inspect and repair any injury to the nail bed. In addition to replace the nail, the distal phalanx is splinted . Reduction and fixation of the displaced fracture may also performed at that time. The patient is able to continue tolerated activity as usual. 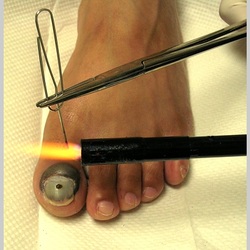 Other special therapy are physical therapy medication and surgery. the physical therapy , may involve the hand therapist to fashion protector tip to be wear until the finger become less sensitive. The patient is prescribed with prophylactic antibiotic against the bacterial infection and NSAIDS for pain relief. Surgical approach may require the removal of the nail bed, The patient will require regional anesthesia such as digital nerve block. Distal edge of the nail is grasp with a clamp and the nail is bluntly dissecct from the eponychium and nail bed. The laceration is later repaired after irrigation with fine absorbable suture ( 6.0-7.0 chromic). Deformity of the regrown nail can be avoided by preventing the formation of adhesion through splinting of the eponychial fold. The piece of the heavy fail (suture wrapper) or the proximal part of the removed nail is useful as splint. 5.0 nylon is useful to suture the replaced nail to the eponychium. The nail bed that is exposed is covered with petroleum gauge and tubular gauge dressing is applied. 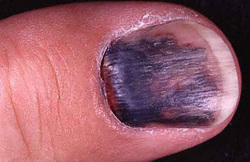 Proper treatment and assessment will  guarantee an excellent prognosis . The complication of subungual hematoma may include osteomyelitis ( as a result of improper wound dressing or unsterile drainage of subungual hematoma), non adherent nail and deformity of the nail ( such as fissure nail) that occur due to unrepaired nail bed laceration or improperly splinted eponychial folda after nail has been removed.


The patient should be followed 1 week later after nail bed repair has been performed.