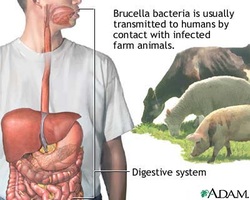 What is brucellosis? Brucellosis is an infectious disease, zoonotic in nature that involve both domestic and wild animals. Human may suffer from a systemic disease of insidious onset or acute onset after becoming an accidental host.

The risk factors for developing brucellosis are drinking milk product or unpasteurized milk in an endemic area or occupational exposure such as laboratory personnel , meat inspectors, veterinarians, abattoir workers, ranch and farm workers.

General prevention of brucellosis may include avoidance of consumption of dairy product and unpasteurized milk . Boiling is effective if pasteurization of milk is unavailable. Identifying sick animal and vaccination of cattle are useful to eradicate species of brucella from cattle, swine, goats and other livestocks.

In term of pathophysiology, a small number of brucella escape the intracellular destruction by surviving the macrophages reaction. The interaction between the host and bacterium is characterized by an increase in interferon gamma and specific gamma and delta lymphocytes with a decrease in body TNF alpha response.

On examining the patient, splenomegaly, hepatomegaly and lymphadenopathy may be found. Discitis of the spine should be ruled out. 20% -50% of patient have osteoarticular involvement. In 5% -25% of patient, symptoms of orchitis and epidydimitis may also manifested. Brucellosis may present occasionally as a localized infection ( pneumonia) and affect any organ of the body.

The laboratory investigation may include blood culture of bone marrow culture of brucella which are the definite diagnosis of brucellosis.The laboratory personnel should be informed by the physician, when the culture has been sent that brucellosis is a diagnostic of possibility. 5- 10% of CO2 is required in some media which required isolation of the pathogen. If brucellosis is suspected , culture should be kept for 4 weeks at least. Standard tube agglutination test ( serological test) are also useful. However, careful interpretation of the results are required. Prozone phenomenon may lead to false negative serological test for brucellosis. False positive results may occur due to cross reaction with antibodies to other form of infection such as francisella tularensis, vibrio cholera or Yersinia enterocalitica. Besides that IgG antibodies against brucella species may also be found in other infection.

An imaging technique such as abdominal ultrasound, CT scan, or MRI scan of the abdomen are useful to detect lymphadenopathy or organomegaly or the affected bone area.

Liver biopsy ( diagnostic procedure) may reveal granulomatous hepatitis or abscess occasionally when performed in patient with fever of unknown origin and brucellosis is one of the differential diagnosis.

General measure in treating brucellosis may include keeping strict personal hygiene. The focus therapy may include first line medication such as 1g per day streptomycin for 2- 3 weeks of treatment initially with 100 mg orally doxycycline every 12 hours for 6 weeks. 240 mg per day of gentamicin may also be considered. Triple therapy such as doxycycline, aminoglycoside and rifampicin are also an alternative form of therapy . In pregnant women, rifampicin and co trimoxazole should be considered.

Prednisolone is useful if central nervous system is affected. Brucella endocarditis may require replacement of the valve. Patient is admitted in case where brucella meningitis and brucella endocarditis are suspected. Follow up is important due to probability of recurrent. The patient who is on rifampicin and aminoglycoside may require liver and renal function test. Rifampicin may cause body secretion and urine to turn yellow.

In general the prognosis is good. However, neurological deficit may occur with neurobrucellosis and brucella endocarditis carries a severe prognosis.

The complication of brucellosis may include a Jarisch -Herxheimer like reaction after initiation of antibiotic treatment. Brucellosis may lead to endocarditis which is the common cause of mortality. Recurrence of brucellosis is common as it is able to sequestrate into an area where antibiotic concentration is low. 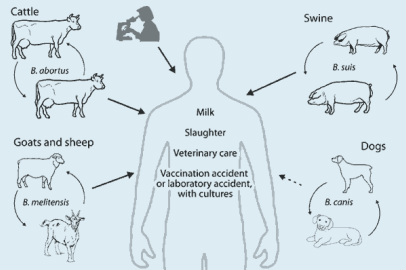