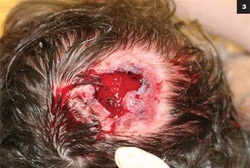 The causes of scalp lesions are divided into infective causes such as cock’s peculiar tumor and tinea capitis, cystic such as sebaceous cyst, traumatic such as cephalhematoma or hematoma or neoplastic causes such as benign growth ( Ivory osteoma) or malignant causes ( primary due to basal cell carcinoma, myeloma, leukemia, malignant melanoma and squamous cell carcinoma) or secondary due to kidney, prostate, thyroid, bronchus or breast carcinoma). Other causes of scalp lesions are seborrheic dermatitis and psoriasis.

History of traumatic lesion on the scalp should focus on cephalhematoma or hematoma.Cephalhematoma occur due to traumatic child delivery. The hematoma is located below the skull periosteum. Hematoma which is boggy in nature will overlie the fracture site on the skull.

Rock hard swelling on the scalp is an indication of ivory osteoma. Ivory osteoma commonly asymptomatic and affecting young adult. Patient also may noticed bleeding that occur while combing the hair. This is commonly associated with malignant ulcer which is common and occur earlier in bald patient. Secondary carcinoma deposit may be present with swelling and bony tenderness. The patient usually has a history of primary tumor and history should focus on identification of the site of tumor. Biopsy is important while confirming the diagnosis.

Sebaceous cyst is confirmed while combing the hair and it is usually multiple in nature. Scaly fine rash on the scalp is an indication of seborrheic dermatitis. Psoriasis usually affect scalp. Lesions elsewhere on the body should be inspected.

On examination, tinea capitis is presented as scaly red patches on the scalp with hair broken in nature that give a stubbled appearance . Cock’s peculiar tumor is inspected as granulating open sebaceous cyst that look swollen and angry due to squamous cell carcinoma.

Ivory osteoma is a hard bony swelling in nature  that arise from the outer table of skull. The skin is mobile over the swelling. Ulcer with hard everted edge is characteristic  of squamous cell carcinoma while ulcerated , pigmented and bleeding lesions are due to malignant melanoma. Raised ulcer with superficial telangiectasia and rolled edge ( pearly appearance) are due to basal cell carcinoma. Skull/scalp lesion due to secondary deposition of the kidney, prostate, thyroid , breast and lung carcinoma. Cervical lymphadenopathy may present in neoplastic lesion. Painful lesion /localized tenderness in the skull is associated with myeloma. 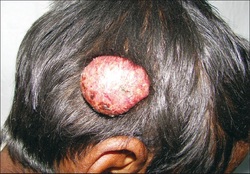 Traumatic lesion on the scalp may occur due to boggy hematoma ( trauma) or cephalhematoma ( common in newborn). In cephalhematoma , the hematoma will collected beneath the periosteum of the skull. X ray is important to exclude the underlying fracture.

Psoriasis is presented with scaly areas well demarcated over the red plaque. Psoriasis may present at other site of the lesions. Fine scales are associated with seborrheic dermatitis.

Laboratory investigation may include full blood count, ESR, chest x ray, skull x ray, serum protein electrophoresis, bone scan, scalp scrapping and biopsy. Full blood count may reveal low hemoglobin level due to malignancy. Raised white cell count due to leukemia and rasied ESR due to other malignancies or myeloma. Chest x ray may reveal the site of primary tumor or secondaries malignancies from other tumor such as malignant melanoma. Skull x ray may reveal area of fracture or secondary deposition from the thyroid, breast or osteolytic from bronchogenic carcinoma. Osteosclerotic commonly present from kidney and prostate. Biopsy is performed on malignant lesion or Cock’s peculiar tumor. Tinea capitis which is fungal infection is best detected with scalp scarping. Secondary bony deposition is identified with bone scan and monoclonal gammopathy with myeloma is detected with serum protein electrophoresis. 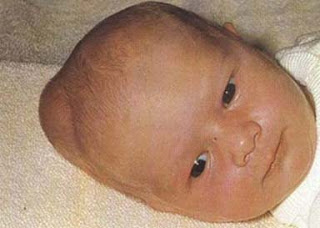