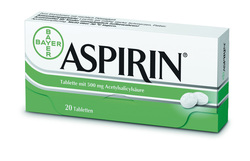 Aspirin will inhibit the action of cyclooxygenase 1 and 2 irreversibly. Cyclooxygenase 1 and 2 or COX 1 and COX 2 will be used to convert arachidonic acid to endoperoxides which later lead to increase the production of prostaglandin. Aspirin will inhibit the synthesis of prostaglandin and later lead to decrease in the level of PGE2 and TXA2 as well as PGI2. Lacking of PGE2 may lead to reduced pain sensation ( analgesic effect), decrease in the synthesis of protective mucus which lead to peptic ulcers and reduction in the setpoint of hypothalamic thermoregulatory centre. Lack of TXA 2 may lead to a decrease in aggregation of the platelet lead to bleeding while lack of PGI2 may lead to an increase in the secretion of gastric acid lead to peptic ulcers.

Aspirin overdose may lead to metabolic acidosis and respiratory acidosis. In this case, the urine need to be alkalinize by promoting the secretion of salicylate. This can be done by administrating sodium bicarbonate. Other side effects Reye’s syndrome /fatal liver failure with viral infection in children, gastrointestinal tract bleeding , gastritis and peptic ulcer.