Pelvic abscess is an acute or chronic infection, most commonly involving the pelvic viscera.Treatment and possible cure require directed therapy that will involve antibiotic therapy and, if medical therapy fails, subsequent surgical therapy.

The symptoms and signs of pelvic abscess are abdominal or pelvic pain, fever or chills abnormal bleeding,vaginal discharge, nausea .Up to 60% to 80% present in the absence of fever or leukocytosis; absence of these findings should not rule out diagnosis.

There are four categories of pelvic abscess based on the etiologic factors which include :
- Ascending infection, spreading from cervix through endometrial cavity to adnexa, forming a tuboovarian complex

- Infection occurring in the puerperium, which spreads to the adnexa from the endometrium or myometrium by a hematogenous or lymphatic   route

- Involvement of the pelvic viscera as a result of spread from contiguous organs, such as appendicitis or diverticulitis.

Nesseria gonorrhoeae and Chlamydia are the major etiologic bacteria in cervicitis and salpingitis but are rarely found in abscess cavity cultures. In elderly patients consider diverticular disease is predisposing factor for pelvic abscess.

The differential diagnosis of pelvic abscess are pelvic hematomas, as may occur after cesarean section or hysterectomy, Inflammatory masses involving adjacent bowel or omentum, such as ruptured appendicitis or diverticulitis and Pelvic neoplasms, such as ovarian tumors and leiomyomas.

Sonogram is a  noninvasive, inexpensive study to confirm diagnosis, estimate size of abscess and monitor response to therapy. CT scan is used for both diagnosis and therapy
(CT-guided drainage). CT scan is  useful where sonogram provides insufficient information, as with intraabdominal abscesses

The management of pelvic abscess are clinical quandary is whether patient requires immediate surgery (uncertain diagnosis or suspicion of rupture) or management with IV antibiotics, reserving surgery for those with inadequate clinical response (e.g., 48 to 72 hr
of therapy, with persistent fever or leukocytosis, increasing size of mass, or suspicion of rupture).Surgery indicated in poor response to medical therapy. Early surgery may be needed in those with large adnexal masses (.8 cm), or in immunocompromised patients. Antibiotic is considered.

During medical management, high index of suspicion for acute rupture, such as acute worsening of abdominal pain or new-onset tachycardia and hypotension, mandating immediate surgical intervention after patient stabilization.

Evidence of ruptured tuboovarian abscess is a surgical emergency. 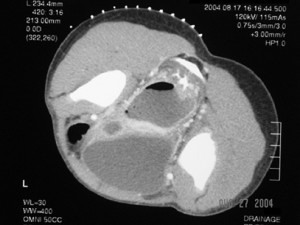