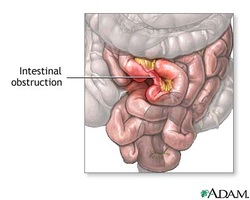 Small and large intestine are predispose to intestinal obstruction. The causes of small bowel/intestine obstruction are intussusception, volvulus, adhesions and hernia ( outside the wall), lymphoma or carcinoma ( tumor), tuberculosis ( common in a tuberculosis endemic area ), atresia and Crohn’s disease ( in the wall ) and food bolus due to bypass surgery or destruction of pylorus) and gallstone ileus ( in the lumen).

Large bowel /intestine obstruction are caused by adhesions, hernia and volvulus( outside the wall) , Hirschsprung ‘s disease, Crohn’s disease, diverticular disease and carcinoma ( in the wall ) and feces ( in the lumen).

Urgent laparotomy is required in case of close loop obstruction of the large bowel that is characterized by tender,tense,palpable cecum with risk of perforation, if the cecum diameter is over 10 cm , it is an indication of imminent cecum rupture. In this case, urgent laparotomy is needed. Large bowel obstruction is characterized as a sharp ‘cut off” of the shadow of the gas in the colon suggestive of obstruction. Pseudo- obstruction is presented with gaseous distention , all along the large bowel including the rectum. 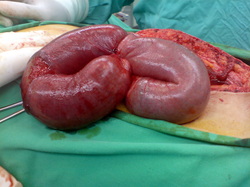 The patient who is on anticoagulant and retroperitoneal hemorrhage is presented with abnormal clotting faIn case such as adynamic obstruction, check the drug history of the pain. Retroperitoneal hemorrhage may occur especially while taking anticoagulant. Other causes include fracture of the spine and recent surgery. Any distention fo the abdomen is uncomfortable but painless. This is followed by vomiting and constipation. Immobile elderly people is predispose to adynamic obstruction.

On examination, observe for the present of scar. It  is vital to exclude obstructed incisional hernia. Hernia orifices are checked. In an obese patient, small femoral hernia is easily miss. The abdomen is usually distended , non tender and tympanic on palpation. The obstructed bowel will produce high - pitched tickling bowel sound. Impending infarction is characterized by localized tenderness, tachycardia and pyrexia. Cecal carcinoma may obstruct the ileocecal valve. This later will lead to small bowel obstruction. Cecal carcinoma and Crohn’s disease may present as mass in the right iliac fossa. This is follow by digital rectal examination.

Large bowel obstruction will present as tense tympanic distended abdomen with an obstructed sound of the bowel. Per rectum examination is performed. Fecal impaction may result in obstruction. A mass is suggestive of obstructing carcinoma. A tender, palpable tense cecum may suggest closed loop obstruction with an ileocecal valve which is competent. Imminent cecal perforation may occur.

Full blood count may reveal low in the hemoglobin level ( anemia) due to malignancy or raised white cell count due to infarcted bowel or infection. Creatinine , urea and electrolytes are useful to detect hypokalemia as a leading causes of paralytic ileus and dehydration.

Abdominal x ray may reveal distended bowel in the central of the abdomen. The small bowel is identify by the present of valvulae conniventes or lines arranged together closely which completely cross the lumen of the bowel. These lines are getting farther apart until it reach the terminal ileum where none is seen . Gallstone ileus is presented as gas in the biliary tree. Sigmoid volvulus is characterized as coffee bean shaped of distended loop of  bowel that arises from the left sides of the pelvis.ctor. Sigmoidoscopy may has a therapeutic approach as it allow the decompression of the sigmoid volvulus by careful inspection of sigmoidoscope. Sigmoidoscopy is also useful in detection of tumor of rectosigmoid. Biopsy is performed to detect any carcinoma or signs of Hirschsprung disease ( absence of ganglion cells).