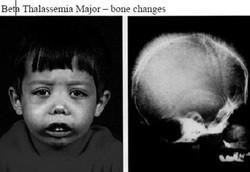 Alpha thalassemia commonly occur due to deletion of one or more four gene which coded for the alpha globin chain of the Hgb.