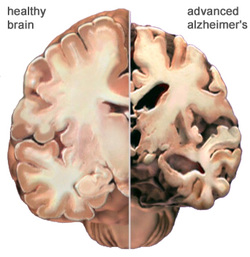 Alzheimer disease is the main cause of dementia. Patient who suffer from alzheimer disease may also complain of certain neurological deficit such as aphasia, loss of motor function or visuospatial dysregulation as well as disorientation. Patient may also develop incontinence.

Alzheimer disease may are caused by atrophy of the nucleus basalis of meynert. This may be accompanied by the evidence of atrophy of the brain cortex with widening of the ventricles and the sulci.

Alzheimer disease may also caused by abnormal expression of the amyloid gene which later lead to increase in production of amyloid  beta protein. In this case, neuritic plaques will be detected. The neuritic plaque is a spherical cluster with peripheral astrocytes and amyloid beta protein core.  This abnormal expression of amyloid gene is associated with familial form of Alzheimer disease which lead to mutation on the chromosome 21 which coded for the amyloid precursor protein gene. Other form of mutation is also associated with familial Alzheimer disease such as mutation the chromosome 1, 14 which coded for presenilin genes and the mutation of the chromosome 19 for apolipoprotein E4.