Symptom finder - The causes of clubbing 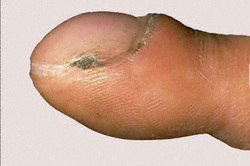 Symptom finder- The causes of clubbing

Clubbing is caused by proliferation of the connective tissue which lead to bulbous enlargement of the distal segments of the toe and fingers. Clubbing is recognized by the loss of an angle that is normally present between the nail base and the nail fold. Other features of clubbing include increase curvature of the nail bed in all direction, fluctuation or sponginess and drumstick appearance ( due to enlargement or expansion of the digits.)

In gastrointestinal systems, Crohn’s disease is presented with perianal sepsis, fistula or aphthous ulceration. Ulcerative colitis is presented with mucous , blood per rectum and tenesmus ( rectal involvement) or steatorrhea, non bloody diarrhea and non specific sign for Coeliac disease. Generally Crohn’s disease, ulcerative colitis and Coeliac disease are presented with weight loss, abdominal pain, diarrhea and malaise. Patient may also present with signs of cirrhosis such as upper gastrointestinal hemorrhage, jaundice, bruising ( impaired  clotting) , varices and abdominal distention due to ascites. History of previous hepatitis infection or number of alcohol intake/ abuse should be noted . In severe case patient may present with coma and encephalopathy.

In , cardio-respiratory systems, the patient may present with shortness of breath and non productive cough which is the characteristic of interstitial lung disease. Bronchiectasis is associated with cough which produce purulent sputum. Any preceded history of alcoholism, pneumonia, dysphagia or aspiration due to neurological condition are associated with empyema and abscess. The patient typically appear malaise, producing productive cough, weight loss and low grade pyrexia. Bronchogenic carcinoma is presented with history of weight loss, dyspnea, hemoptysis and chronic smokers. Bronchogenic carcinoma is also presented with clubbing which is part of the generalized manifestation of arthritic of hypertrophic pulmonary osteoarthropathy Any signs of metastasis symptoms ( jaundice, bone pain) or paraneoplastic syndrome ( polyuria, thrist and neuropathy ) should be given attention.

Other important points to be taken on history include duration of the symptoms and family history. The duration of clubbing gives an indication of the underlying cause of clubbing. Clubbing that begin since the patient is young/infant suggest a cyanotic congenital heart disease or a familial cause due to coeliac disease or cystic fibrosis. Clubbing tend to present as secondary manifestation of those disorders. Family history is also important. Family member may suffer from cystic fibrosis or coeliac disease which are commons hereditary causes that related to clubbing. 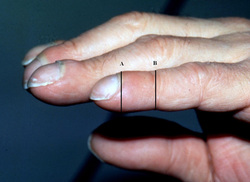 The examination may focus on inspection, chest and abdominal examination. Patient is observed for any signs of cachexia or wasting that indicates the present of chronic gastrointestinal  lung disorders or malignancy.Congenital cyanotic heart disease/lung disease patient may present with central cyanosis of the mucous membrane. Any coeliac disease is present with aphthous ulcer while ophthalmoplegia , exophthalmos, resting tremor and goiter are features of Graves disease. Patient is also inspected for any signs of infective endocarditis such as the present of flat non tender lesion/ macule on the sole and the palm ( Janeway  lesion), raised lesion which is tender on the pulps of the finger ( Osler’s  node) and splinter hemorrhage.

Pyrexia or high temperature is detected on the cases such as inflammatory bowel disease, infective endocarditis and suppurative lung disease that manifest physically as clubbing.

Examination of the abdomen should focus on the signs of chronic liver disease or inflammatory bowel disease. Occasionally in Crohn’s disease , right iliac fossa mass or tenderness will present. Splenomegaly is associated with either infective endocarditis or portal hypertension due to liver disease.

Chest examination may reveal the present of any new murmur or changing in the characteristic of murmur in infective endocarditis. Bronchiectasis is presented with retained secretion or widespread crepitation coarse in nature of the lung field. The interstitial lung disease is presented with fine quality end inspiratory crepitation while lung abscess is presented with more localized crepitation worse in nature and dullness while percussing the lung field. Malignancy may present with pleural effusion which is characterized by absent of the breath sound, dullness to percussion and unilateral decrease in chest expansion. Besides malignancy, thoracic empyema is the first line of diagnosis in case of pleural effusion in pyrexic patient. Malignancy is suspected if the patient present with weight loss , respiratory or gastrointestinal disease and raised inflammatory markers.

Urinalysis or urine studies may reveal the present of micro emboli in case of infective endocarditis. The present of respiratory symptoms should require the need for chest x ray. Bronchogenic carcinoma is confirmed as the present of cavitating mass, peripheral or hilar opacity, luminal obstruction that collapse a segment of the lung , phrenic nerve palsy that cause elevation of hemi diaphragm, pleural effusion or invasion of the mass that cause destruction of the adjacent rib.The present of spherical shadow that is accompanied with air fluid level or central lucency is an indication of the lung abscess. Any multiple areas of consolidation and dilated bronchi which is visible is an indication of bronchiectasis. The present of honeycomb appearance ( hazy shadowing at the base of the lung) indicates fibrosing alveolitis. Barium enema is useful to detect inflammatory bowel disease. Echocardiography may reveal the present of large vegetation which is associted with infective endocarditis. Colonoscopy os useful to detect the present of inflammatory bowel disease. Sigmoidoscopy is also useful to confirm the present of inflammatory bowel disease which is characterized by the areas of hemorrhage, erythematous mucosa and ulceration. Rectal and colonic biopsy is performed to distinguish between Crohn’s disease and ulcerative colitis. Small bowel enema is used to detect the present of Crohn’s disease. If thoracic empyema or bronchogenic carcinoma is suspected consider CT- scan of the thorax. CT -scan of the thorax is also useful to confirm the present of bronchiectasis or idiophatic pulmonary fibrosis. 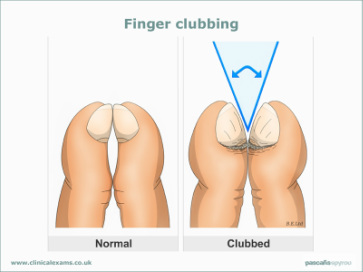