​Adenomyosis Pain
Adenomyosis is an invasion of the endometrium into the myometrium which is benign in nature. Adenomyosis produced a diffusely enlarged uterus. Microscopically, adenomyosis is presented with ectopic non neoplastic endometrial glands and stroma surrounded by hyperplastic and hypertrophic myometrium. In specific case, it may present as circumscribed myometrial mass known as adenomyoma.

Adenomyosis most commonly affects the posterior wall of the uterus. However, the term adenomyosis may also refer to benign hyperplastic change in ampulla of Vater, gallbladder and bile duct.

Adenomyosis usually affect female in the fourth and fifth decade. There are variations among different ethnic groups, race and geographical locations.

Due to variability of the criteria used for diagnosis, an accurate determination of prevalence is difficult. The prevalence is reported to be from 50% - 70%.

What is adenomyosis? It is an abnormal invagination or ingrowth of the basal endometrium into the junctional zone.

​Adenomyosis may lead to bleeding, pain and infertility. This is due to the aberration of the sex steroid hormones, altered proliferation of the cells, inflammation and nueroangiogenesis.

In case of adenomyosis, the junctional zone may consists of a region of morphologic dysfunction and structural weakness with susceptibility to invagination of endometrial stromal cells. The junctional zone environment is modulated by increase pressure in the uterine due to leiomyomas or pregnancy. This made it more susceptible to invagination of the endometrial stromal cells.
Other theories of the pathogenesis of adenomyosis include metaplasia theory, Mullerian remnants theory, tissue remodeling theory, multipotental perivascular theory, epithelial -mesenchymal transitional theory, hyperproliferation of uterine smooth muscle cell theory and mast cell activation theory.

In multipotential perivascular stem cells theory, adenomyosis is due to the pathophysiologic vascular remodeling and angiogenesis. This lead to vascular smooth muscle hypertrophy, proliferation and later migration.

Increased in estrogen concentration may lead to enhanced growth of the endometriuam and angiogenesis and invagination into the junctional zone. This is known as epithelial – mesochymal transition theory.

Based on the DNA microarray and proteomics analysis, it is revealed that the specific genes which are expressly differentiation in adenomyosis matched the eutopic endometrium. It is suggested that epigenetic and genetic abnormalities lead to the pathogenesis of the adenomyosis.

The risk factors of developing adenomyosis are age which is more than 35 years old, treatment by tamoxifen, multiparity and other less common causes such as smoking and previous uterine surgery.

Adenomyosis is associated with urinary tract dysfunction, endometrial polyps, endometriosis, uterine fibroids, and leiomyomas.
MRI and biopsies of the uterus and endometrium are useful in diagnosing adenomyosis. Patient may present with enlarged uterus, dysmenorrhea and pelvic pain.
Patient with adenomyosis may appear asymptomatic or present with non specific symptoms. The most common symptoms are chronic pelvic pain, dysmenorrhea, menorrhagia and abnormal uterine bleeding. Patient may develop urinary tract symptoms such as urge urinary incontinence, daytime frequency and stress urinary incontinence. On physical examination, the uterus may appear tender and enlarged.

The investigation needed for detection of adenomyosis include imaging technique and biopsy.

On MRI, adenomyosis may present with low density widening of the junctional zone on T2 –weighted images, which relates to the thickening of junctional zone and hyperplasia of the smooth muscle.

Pathological interpretation of the uterine sparing operative treatment or hysterectomy with histological evaluation also pose its own problems.

The diagnostic difficulty in marcellated specimens arises due to the modification of the spatial arrangement of the tissue which leads to difficulty in referencing the surface. Another issue is the sampling bias . The criteria also vary among the pathologists regarding the depth of invasions.

Medication may include continuous use of oral contraceptive pills, selective progesterone receptor modulator and high dose progestins which temporarily improve the symptoms.

​Adenomyosis regression may temporarily induce by danazol, Gnrha, aromatase inhibitor and levonogestrol releasing intrauterine device.
Adenomyosis symptoms usually resolves after the menopause. It is a benign proliferative of endometrial tissue. The complications of adenomyosis are increased risk of malignant disease and anemia from loss of blood associated with heavy periods. 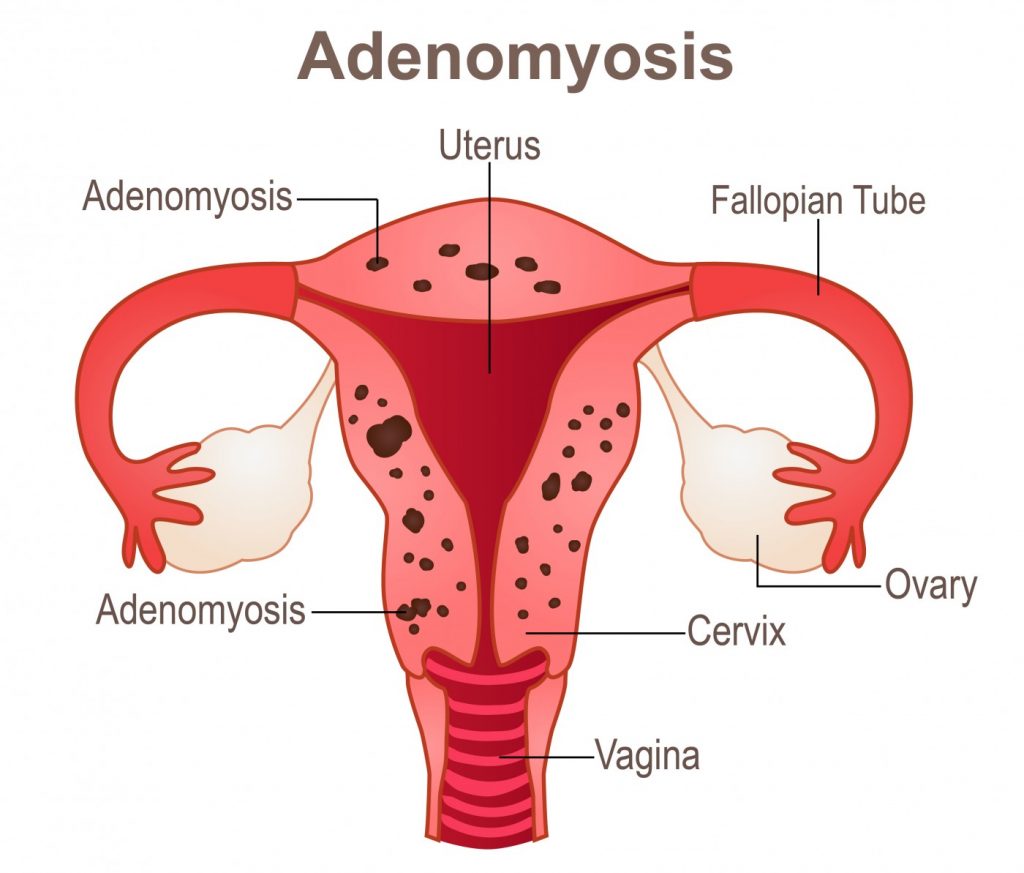