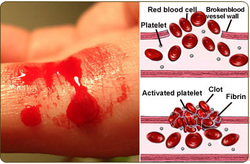 Patient is treated with desmopressin and factor VIII replacement and patient should stay away from aspirin or other form of anticoagulant such as heparin and warfarin.