Emergency Strategy - How to treat frostbite 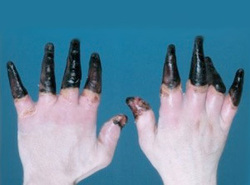 The essential steps in managing frostbite are to perform airway ( opening and maintaining the airway), breathing ( continuous ventilation) and circulation ( improving the circulatory system ) assessment.

The next step include removal of wet and restrictive garment. It is important to avoid any rubbing or applying the snow or manipulating the limb that suffer from frostbite. Refreezing injury may occur during transport to nearby health facilities. In this case dry rewarming is avoided. Field rewarming in a warm water ( 40- 42 degree) is considered if suitable facilities are available. It is vital to immobilize and protect the frostbite are during transport. Severe case of frostbite may require 0.9 % normal saline as IV fluid volume expansion.

Hypothermia is something that need to be aware of as frostbite victim is associated with hypothermia. Hypothermia carries a risk of cardiac dysrhythmias and should be avoided. Identify and correct hypothermia.

Rapid rewarming of the frostbitten are is considered for 15- 30 minutes in a 40- 42 degree celsius water bath. Rapid rewarming is only considered if it is not rewarmed before and injury less than 24 hours. Water temperature is monitor to prevent thermal injury. Rewarming will be stopped as the limb become pliable, red and warm. IV morphine may be useful as analgesic while prostaglandin effect on skin necrosis is overcome with NSAIDS. Tetanus prophylaxis is also given to the patient.

The frostbite area is splinted and elevated . Vasoconstrictive agent is avoided and the dressing is change 2- 4 times daily. Any intact blister can be treated with aloe vera cream. It will affect the cascade of arachidonic acid. Any preparation such as salicylate, scent and alcohol are avoided as they interfere with  aloe vera cream.

Common mistakes made in dealing with frostbite are failure in considering the present of compartment syndrome, unable to detect systemic illness, hypothermia, allowing the refreezing cycle to occur and failure in rewarming ( failure to keep water around 40 -42 degree celsius).

Patient is admitted unless the patient suffer from superficial case of frostbite. If there is a risk of refreezing lower threshold of admission is required. After the patient has been discharge, follow up with general or burn surgeon is required.

Frostbite typically affect the nose, ears, fingers and toes. Frostbite can be classified into superficial frostbite and deep frostbite.

The complication of frostbite may include the formation of dry black eschar and necrosis of the skin due to devitalized tissue demarcation of the injuries over weeks. This condition commonly occur as a result of hemorrhagic blister, mottling or persistent cyanosis. Lack of sensation and reduced mobility after rewarming are commonly associated with poor prognostic indicator.

The common conditions that may mimic ( differential diagnosis) of frostbite are chilblains, trench foot and frostnip. Chilblain may present as erythematous vesicles or plaque which is localized in nature and cyanosed. Chilblain may occur due to repeated exposure to cold or in vasculitis’ patient. Treatment may include dry rewarming or symptomatic treatment.

Trench foot is also known as immersion foot. It may present as pulseless, paraesthesia, pallor, numb and mottling of the foot. The neurovascular systems are damaged. Trench foot commonly occur due to prolonged period of exposure to wet cold. It is difficult to distinguish trench foot from frostbite.

Frostnip will develop as transient paraesthesia and numbness that develop after dry rewarming. Frostnip is a superficial lesion which lead to reversible crystal formation without destruction of the tissue.

Patient with frostbite may also present with co morbid condition such as hypothermia, compartment syndrome, neurological or cardiac problems, hypoglycemia and trauma which require further attention. A vascular and neurological examination will be performed after taking history from the patient ( skin temperature, skin color, consistency of the soft tissue and any formation and color of the blister).

This will later followed by series of investigations that may include full blood count, glucose, urea and electrolytes and blood urine nitrogen as well as creatinine. Gram stain and culture may also considered. MRA and technetium 99 scintigraphy are considered in determining the need for amputation based on the identification of salvageable and unsalvageable tissue.

Warm water bath is made by mixing the cold tap water and hot water into a large basin and monitor the temperature to keep the water at 40 - 42 degree celsius. Wrm water should be added at instance due to the water cool rapidly. Cool temperature may delay the tissue survival. Whirlpool hydrotherapy is another alternatives.

What is frostbite? Frostbite is a damage to the tissue by exposure to the cold temperature. Common causes of frostbite are exposure to cold condition which is based on humidity, chills of the wind, wet clothes, wet skin or duration of exposure. Frostbite may lead to tissue /cell damage due to intracellular ice crystal formation. Extracellular crystal formation may indirectly lead to damage to the cell due to enzymatic disruption and intracellular dehydration. Extracellular exudation of fluid may lead to cleat blister. While rewarming , re perfusion  injury may occur. This occur due to extravasation of the fluid which is rich with inflammatory mediators ( thromboxane and prostaglandin) through endothelium that is damaged which lead to platelet aggregation and vasoconstriction . Finally, ischemia, arterial thrombosis and necrosis may develop. Poor circulatory status, old /extreme of age or altered mental status ( intoxication) are predisposing factors for frostbite.