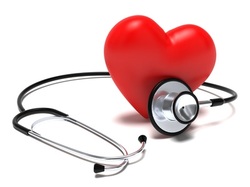 The first step is to comment on the patient general health (, pale, coughing, shortness of breath) and the surrounding ( ECG, ventilator,nebulizer, oxygen, medication, IV drips.).

Next inspect the hand of the patient. Look for any evidence of clubbing ( mostly due to congenital heart disease or infective endocarditis.) Then, look for the stigmata of infective endocarditis such as Osler’s nodes, Janeway lesions and splinter hemorrhage. Look also for any pale or bluish disoloration of the fingers which are suggestive of peripheral cyanosis. Feel the patient’s hand and assess for any evidence of retention of carbon dioxide ( warm clammy and red palms). Spoon shaped nail is the common term used to describe the present of anemia. Spoon shaped nail is also known as koilonychia. There will also be wasting of thenar eminence.

After that, the pulse is felt. Three tips of  fingers are used to feel the radial pulse. Assess the rate and rhythm of the pulses. Bradycardia if the rate is less than 60 and tachycardia if the rate is more than 100 beats per minutes. Assess the rhythm. The rhythm may be regular, regularly irregular and irregularly regular. Regularly irregular is associated with heart block while irregularly regular is associated with atrial fibrillation.

Special test is performed to identify any collapsing pulse. Four fingers are placed across the wrist. The patient ‘s arm is then raised above the head to illicit the sign. Collapsing pulse is associated with aortic regurgitation. In aortic regurgitation, there will be backflow of blood into the left ventricles which reduce the diastolic pressure and lead to wide pulse pressure.

blood pressure measurement is considered while the patient standing and lying to identify the present of postural hypotension.

Eyes inspection may reveal pallor of the conjunctiva which is a sign of anemia. Besides that, there will be corneal arcus which is yellow/ white band around the iris that is an indication of hyperlipidemia. Yellow skin around the eyes is known as xanthelasma.

Blue lip is an indication of central cyanosis. Assess the patient’s dental hygiene and look for any evidence of Marfan syndrome such as high palate beside aortic regurgitation. Rosy cheeks with blue tinge is also known as malar flush which is associated with mitral stenosis and pulmonary hypertension.


Initially comment on the present of any scars. Then palpate the apex beat which is at the fifth intercostal space at mid clavicular line. Palpate for any thrill. Thrill is also known as palpable murmur which is identify by placing the palm of the hand over the area of the valve such as the aortic valve, pulmonary valve, tricuspid valve and mitral valve.

Any evidence of mitral stenosis is best identify by asking the patient to roll on the left sides breath out and hold breath on expiration. Using the bell of the stethoscope ( low pitched sound is best detected with the bell) listen at the apex. Mitral stenosis is presented with mid diastolic murmur in the apex.

Additional examination include palpate the abdomen and inspect for any evidence of abdominal aortic aneurysm. Leg is inspected and palpated for any evidence of pitting edema, ulcers, varicose veins, ulcers and deep vein thrombosis. Feel the pulses at the foot which include popliteal pulses, posterior tibial pulses and dorsalis pedis pulses.