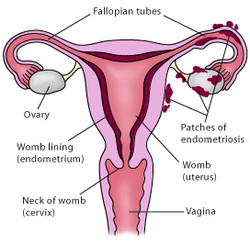 Endometriosis is a nodule which consists of endometrial tissue. The nodule is non neoplastic in nature and mostly present outsides the uterus. Endometriosis mostly present at the peritoneum of the pelvis, uterine ligaments and ovary as well as rectovaginal septum. However, endometriosis may also occur within the myometrium. This is known as adenomyosis.

Under histological approach there are present of pigment of hemosiderin, endometrial stroma and endometrial gland. This nodular endometrial tissue may undergo menstrual cycle bleeding which later lead to the formation of chocolate cysts.

Patient with endometriosis commonly is treated with medication such as GnRH, progesterone, oral contraceptives and danazol. Surgical treatment is also considered.