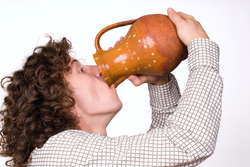 Patient will be admitted if presented with altered mental status , trauma to the head, severe dehydration, seizures and imbalance of the electrolytes.

Patient’s airway, breathing, circulation, disability and exposure are assessed and any abnormalities are treated. If the patient suffered from seizures attack, consider treating it. Make sure the patient remain immobilized. IV line is established and considered fluid resuscitation in case the patient suffer from severe dehydration. Blood glucose level is also measured. Traumatic cases should be treated. ( Diabetes insipidus has a strong relation with trauma to the head).

Cranial diabetes insipidus is treated with desmopressin ( drug of choice orally or intra nasally) to control symptoms. Desmopressin may lead to cerebral edema post - operatively and it is useful in controlling  polyuria and polydipsia. Lysine vasopressin and arginine vasopression may inducee coronary spasm and it is useful for dehydration test. Diabinese ( Chlorpropramide) is useful in partial case of cranial diabetes insipidus as it stimulates the release of AVP and increase the effect of vasopressin at the renal tubules.

The differential diagnosis of diabetes insipidus are psychogenic polydipsia ( due to osmotic diuresis, use of diuretics, diabetes mellitus uncontrolled,solute induced polyuria and acute renal failure), excess of sodium ( hypertonic saline administration, excessive intake of sodium bicarbonate following resuscitation , high sodium in the breast mil, salt poisoning and ingestion of saltwater) and deficit of water ( insensible loss of water, lack of breast feeding and reduce or no intake of water).

The investigations require are full blood count ( to rule out anemia), urea and electrolytes (hypernatremia, hypokalemia, hypercalcemia), urinalysis is performed ( in diabetes insipidus the specific gravity will be low) , serum and urine osmolality (in  diabetes insipidus the serum osmolality is high and while urine osmolality is low), imaging technique include MRI of the brain, CT scan of the brain(pituitary gland) and chest x ray. Serum and urine AVP are also performed.

Nephrogenic diabetes insipidus is commonly cause by disorders such as sarcoidosis, sickle cell disease, amyloidosis, congenital renal disorder, polycystic kidney disease, renal dysplasia and obstructive uropathy, hypokalemia and hypercalcemia. Drugs such as demeclocycline, methoxyflurane, phenytoin, aminoglycoside, lithium and amphotericin. All of these condtion may affect the normal function of the kidney. Nephrogenic diabetes insipidus occur due to lack of response to AVP secreted from pituitary gland.