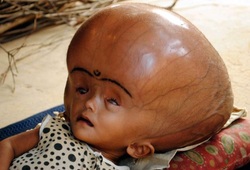 Hydrocephalus may present with signs and symptoms such as large skull in adult, disturbance of the vision, nausea, vomiting, headache, raised intracranial pressure and seizures.

The treatment of hydrocephalus may include removal of the mass which lead to obstruction ( tumor of the choroid plexus) and the insertion of the ventriculoperitoneal shunt.