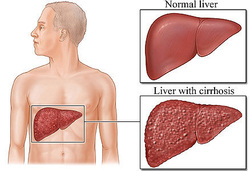 Cirrhosis may lead to destruction of the liver which cause and increase in the portal venous pressure. This will finally lead to hypoalbuminemia ( decreased in plasma oncotic pressure) and further leads to ascites and peripheral edema. Aldosterone hormone may undergo degradation process in cirrhosis.

It is advisable for the patient with cirrhosis to abstinence from alcohol intake, consider vitamin ( fat soluble vitamin) supplement and restriction of sodium intake. This is done to avoid any complication such as hepatorenal syndrome, hepatic encephalopathy and hepatocellular carcinoma. Ammonia may act as neurotoxin which lead to hepatic encephalopathy.

Laboratory investigation may reveal high level of ammonia in the blood, increase liver enzyme such as ALP, AST and ALT, hyperbilirubinemia and hypoalbuminemia as well as prolonged in prothrombin time ( PT ) as a result of deficiency in coagulation factor.