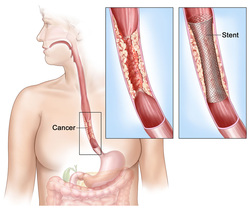 Patient mostly present with advanced stages of esophageal carcinoma and the treatment at this time will focus on palliation therapy ( surgical resection treatment, radiation therapy and chemotherapy) as the survival is less  than 15% in 5 years.