Gait abnormalities may be due to neurological condition such as cerebral palsy that present as scissoring gait, peripheral neuropathy as sensory ataxia, stroke as hemiplegic gait, frontal lobe lesions as apraxic gait, peroneal nerve palsy as foot drop gait, cerebellar disease as cerebellar ataxia and Parkinson’s disease as festinant gait.

Gait abnormalities may also be due to structural disorder such as intoe gait due to femoral anteversion, weak hip abductor that present as waddling gait or Trendelenburg gait, length discrepancies as  short leg gait and pain as antalgic gait.

Drug such as phenytoin or alcoholism as well as multiple sclerosis may lead to cerebellar disease. History of trauma to the lower limb is important. On healing, length abnormalities are common in case of previous fractures of the long bone. Foot drop may occur due to disruption of the common peroneal nerve due to fibular neck fractures. Peripheral neuropathies are associated with Vitamin B deficiency, carcinoma and diabetes. Severe head injuries may lead to contusion of the frontal lobe. It is important to elicit previous history of Parkinson’s disease or stroke.

Intention tremor is associated with cerebellar disease while resting tremor is associated with Parkinson’s disease. Peripheral neuropathy commonly present with impairment of joint position sense, loss of sensation and paraesthesia. Pain is common with antalgic gait. Patient is aware of the pain and able to point the site of origin of the pain. Foot drop gait is described as paralysis of foot dorsiflexion as a result of loss of motor function. Stroke may present with more severe cases of paralysis ( extensive in nature), affecting the leg and arm with hemiplegic gait. In certain cases such as sensory apraxia, there will be lost of visual cues and the patient will find it difficult to walk in the dark as a result of impairment of proprioception.

Cerebral palsy or congenital structural disorder is associated with an abnormality of gait that present since birth. Any acquired lesions of the peripheral and central nervous system may lead to abnormalities of the gait. Length discrepancies are due to contraction of soft tissue surrounding the joint, disorder that affect the length of the bone or joint articulation. 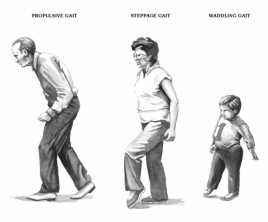 Asymmetrical gait/ unilateral gait disorder is mostly associated with structural causes. Painful limb is characterized by antalgic gait. Antalgic gait is presented with decreasing in the stance phase. In Trendelenburg gait, when the leg is lifted forward, there will be downward tilt of the pelvis. Trendelenburg gait is caused by subluxation of the joint of the hip, femoral neck shortening, contralateral hip abductors weakness and painful hip disorder. The leg that swings in an outward arc before returning to the midline is an indication of hemiplegic gait. Foot drop gait is characterized by the knee on the affected side being lifted higher while walking.

Neurological examination may be performed to uncover the underlying causes. Cerebellar improvement is characterized as dysarthria, dysdiadochokinesis, broad based gait, nystagmus and intention tremor which is elicited by performing the finger- nose test. Peripheral neuropathy is characterized by loss of proprioception, vibration and light touch in a stocking and glove distribution. Parkinson’s disease is characterized by lead pipe rigidity and cog wheel rigidity of the limb,pill rolling tremor and mask like facies. Primitive reflexes are common with frontal lobe disorder. The primitive reflexes are palmomental reflex ( dimpling on the chin due to gentle stroke of the thenar eminences),sucking reflex ( stroking on the side of the mouth may cause sucking action.) and grasping reflex ( when the physician stroke or place his hand on the patient’s hand, the patient will grasp the physician ‘s hand. Cortical stroke is characterized by clasp knife rigidity, hyperreflexia and upper motor neuron disorders.

Musculoskeletal examination will focus on the ankle, knee and hip. The apparent and real length of the lower limb are measured. The apparent length is measured as the length from the xiphisternum to the medial malleolus. The real length is measured from the anterior superior iliac spine to eh medial malleolus. Any differences may require specific measurement of the tibia and femur to identify sites of shortening. In femoral anteversion, the internal rotation is prominent while inspecting both feet in resting position. Any apparent shortening due to fixed flexion deformities of the hip can be identify by performing the Thomas’s test.

After general examination, specific examination now focus on recognizing the underlying causes. In this case, if the patient suffered from raised intracranial pressure due to brain tumor, consider fundoscopy to look for sign of papilloedema. Mental state examination is considered in case of apraxic gait as a result of frontal lobe disorder to rule out dementia. urgent neurological referral is considered when the underlying causes of ataxia is unclear.

The investigations may include local x ray, CT- scan, MRI- scan and nerve conduction studies. Any structural causes such as fractures or deformity is detected on local  x rays. MRI scan or CT scan is useful for identification of any space occupying lesions or stroke. Nerve conduction studies may reveal peroneal nerve palsy or periplheral neuropathy. History and examination are the most important tool in diagnosing the presentation of gait abnormalities.