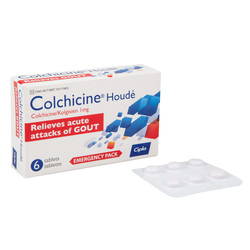 Colchicine may carry its own side effects such as alopecia, suppression of the bone marrow and gastrointestinal discomfort. Colchicine acts by blocking the formation of leukotriene B4 and decreasing the migration of the leukocytes to the affected sides by binding to the tubulin which may lead to induction of microtubular depolymerization.