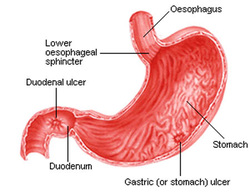 There are two form of peptic ulcer disease which include duodenal ulcer and gastric ulcer.

Duodenal ulcer typically present with gain in weight which is related to pain in the epigastric region if there was a decrease in the intake of meal.

Gastric ulcer typically present with weight loss which is related to epigastric pain which is greater with food/meal intake.

Duodenal ulcer may occur due to hypersecretion of the gastric acid and pepsin with a decrease in mucosal protection. There is a hypertrophy of the Brunner gland.Granulation tissue, infiltration of neutrophil an necrotic fibrinoid debris are common histological finding of duodenal ulcer. Duodenal ulcer also present with defect of the mucosal layer with punched out margin in the first part of the duodenum.

Gastric ulcer may occur due to decrease mucosal protection from the gastric acid. Gastric ulcer typically present with punched out clear margin of the mucosal defect in the pre- pyloric and antral region of the stomach.

In severe case ( duodenal ulcer or gastric ulcer) may lead to obstruction, perforation and gastrointestinal bleeding.

Urease may produce ammonia which leads to alkaline environment in the stomach. Mucin producing cells will be destroyed by the vacuolating cytotoxin. This will lead to lower production of the mucus and increase risk of ulceration due to the host inflammatory response.

Helicobacter pylori may also contributes to other forms of disorder such as gastritis or gastric adenocarcinoma.

Helicobacter pylori which inducing peptic ulcer should be treated with antibiotic , bismuth and proton pump inhibitors. The choice of antibiotics include metronidazole, tetracycline and amoxicillin.