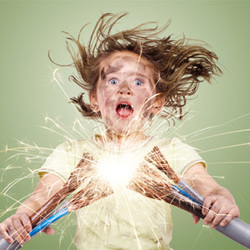 Patient with electrical shock may present with cardiopulmonary system depression such as asystole, myocardial infarction, ventricular fibrillation and other types of arrhythmias. The cardiovascular conduction effect may occur within first hour of electrical shock.

Muscle necrosis may be extensive and lead to myoglobinuria which causes acute renal failure /pigmented induced renal failure. Acute tubular necrosis may also present as well as pre renal azotemia due to hypovolemia. Any falls due to electrical shock or muscle contraction which is increased in strength due to electrical shock may lead to blunt injuries , fracture and dislocation. Eyes and ear injuries such as damage to the optic nerve, uveitis, cataract, separation of the retina and perforation may also occur as a result of injuries to the electrical shock.

Electrical shock due to lightning is divided into strike potential, side flash, direct strike and flashover. Flashover is when the electrical current strike the skin and does not enter the body. Strike potential is when the lightning that strike the ground is closer to the victim who is one foot touching the ground. Direct strike is presented with entry and exit wound due to the flow of major current directly and associated with metal object. Side flash is when the current splashes to the ground near the patient. The flash may produce shock wave from the extreme heat and caused mechanical trauma as it is transmitted to the body.

Man made electrical shock or electrocution are influenced by the grounding , resistance of the body ( increase magnitude of resistance- nerves< blood vessel< muscle < skin < tendon < fat < bone. Bone provides the highest resistance against electrical current), duration of electrical contact, direct current ( less dangerous) or alternating current and voltage( the higher the voltage, the greater degree of tissue damage) and current ( the greater the current the greater degree of tissue damage) Relevant injuries are avoided by performing audiometry and otology examination.

In term of management, the rescuer is advised to avoid any direct touching of the patient unless protective clothing is properly worn and making sure that the sources of electricity has been shut down. The treatment is followed by immediate resuscitation of the patient ( airway, breathing and circulation and immobilization with assumption of cervical spine injuries). Tetanus vaccination is administrated.

Patient may also required fluid replacement due to dehydration and hypovolemia from burns.Urine output monitoring is important. Urine output should be more than 100 ml/hour and keep it more than 100 ml.hr to avoid formation of cast intratubular until pigment has been cleared. Careful fluid balance is considered in cases of cerebral edema. Acute renal failure /cerebral edema may be avoided by considering furosemide and mannitol. Prophylactic therapy for Curling’s ulcer /gastric ulcer are considered following burn due to electrical injuries.

Early excision is considered in a burn area. This is the form of treatment for  necrotic, ischemic or burn tissue . Fasciotomies are considered. Any dislocation or fracture is treated.