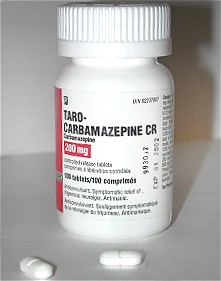 Carbamazepine or also known as oxcarbazepine may lead to hyperpolarization of the neuronal cell membrane by inhibiting the flow of sodium ions through the sodium channel.

Carbamazepine is a type of drug which may induce cytochrome p450 which lead to increase metabolism of drugs such as phenytoin,corticosteroid, warfarin and oral contraceptive pill.

The common side effects of carbamazepine may include hepatotoxicity, aplastic anemia, gastrointestinal upset, dizziness and double vision.