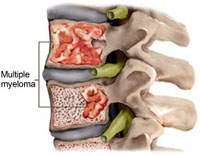 Multiple myeloma is commonly present with fried egg appearance of the neoplastic plasma cell which derived from the B lymphocytes on the bone marrow.The neoplastic cell will secretes osteoclast activating factor which later leads to lytic lesion which commonly present on the long bone. Peripheral blood smear may reveal rouleaux formation of the erythrocytes.

The neoplastic cell is originated from the proliferation of the monoclonal plasma cell. Patient with multiple myeloma may present with signs and symptoms such as fracture of the bone, bone pain, primary amyloidosis and renal insufficiency.

Multiple myeloma may present with monoclonal immunoglobulin spike M protein which is detected on the serum protein electrophoresis. Other differential diagnosis of monoclonal spike M protein is monoclonal gammopathy of undetermined significance ( MGUS) which is presented with no neoplastic infiltration of the bone marrow, no Bence Jones protein and no change in the immunoglobulin concentration. Multiple myeloma may present with detection of Bence Jones protein, in urine ( IgG light chains), increase in ESR, azotemia, hypercalcemia and hyperglobulinemia.