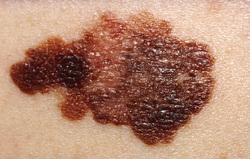 
Malignant melanoma occurs as a result of fair skin, genetic predisposition and excessive exposure to the sunlight as well as patient who is immunosuppressive. The treatment of malignant melanoma may focus on the chemotherapy, dissection of the regional lymph node ( if involved) and the main treatment ( surgical excision).