Symptom finder - The causes of hallucinations 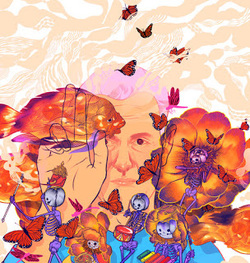 Symptom finder - The causes of hallucinations

What is hallucinations? It is an apparent perception of sensation of an external object when no such object is present. Illusion is a misinterpretation of a real perception.It is important to differentiate hallucination from illusion.

On examination, look for signs of infection. Monitor the temperature . Observe for any signs of kidney failure or renal failure. Full mental state examination is performed for any possibilities of psychiatric disorders as well as full neurological examination for exclusion of any space occupying lesions.

Full blood count may reveal raise in white cell count due to infection or raise in mean capsular volume ( MCV) in excessive intake of alcohol. Urea and electrolytes may reveal renal failure or metabolic disturbance . Liver failure is identified with liver function test. Blood sugar measurement is useful in case of hyperglycemic ketoacidosis. Hyperglycemic ketoacidosis and urinary tract infection can also be detected with urinalysis.

Toxicology screen is performed to identify any drug abuse. Arterial blood gases is performed to rule out any metabolic disturbance and hypoxia. EEG is useful to detect the present of temporal lobe epilepsy. CT scan may detect any space occupying lesion and to identify the causes of dementia.