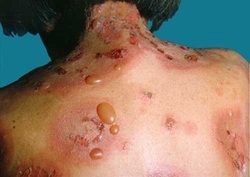 Bullous pemphigoid can be a chronic remitting and relapsing condition. Bullous pemphigoid is an autoimmune disorder which is caused by the reaction of IgG antibodies against the hemidesmosomes of the epidermal of the basement membrane.

The treatment of bullous pemphigoid include corticosteroid therapy.

Pathologically bullous pemphigoid are presented with edematous dermis, bullae in the subepidermal area and perivascular infiltration of the lymphocytes and eosinophils.