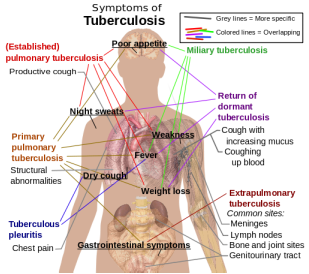 Tuberculosis is caused by inhalation of droplets which consists of mycobacterium tuberculosis. Tuberculosis may be asymptomatic but may also present with symptoms such as fever, weight loss, night sweat, hemoptysis  and fatigue.

Primary tuberculosis is a term to describe few residual bacilli who survive the action of macrophages and T cells and lay dormant in the Ghon complex. Ghon complex may present as lesion in the upper part of the lower lobe. There will be a calcified lesion with enlarged caseous hilar lymph nodes. Chest x ray may reveal calcified Ghon complex.

Tuberculosis is treated based on the 4 drugs regimen. The drugs include pyrazinamide,rifampicin, ethambutol, streptomycin.