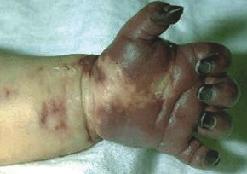 Disseminated intravascular coagulation ( DIC) may present with microangiopathic hemolytic anemia as well as bleeding and clotting/thrombosis at the same time. DIC may manifested as petechiae, bleeding from the venipuncture sites, pupura or ischemia of the toes and the fingers.

Disseminated intravascular coagulation ( DIC) is treated with transfusion of platelet with some combination of the heparin.