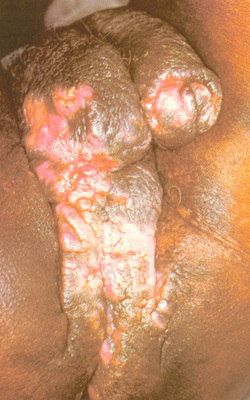 Donovanosis is also known as granuloma inguinale. Donovanosis is a sexually transmitted disease which manifest as a multiple nodules or single lesions.

Granuloma inguinale ( donovanosis) is an endemic in developing and tropical countries such as Papua New Guinea, India, Southern Africa and Southern Australia. In the US, donovanosis ( granuloma inguinale) is a rare condition. There are less than  100 cases annually. The risk factors are the occupations, travel, works and geographic location ( endemic in tropic ). Barrier contraception id a form of general prevention.

The laboratory investigations include identification of the organism based on the clinical appearance such as red shaped oval organism ( Donovan bodies) from scraping of the lesions. Scracping of the lesion is performed gently with abrasion of the lesion with a sterile gauze pad to stimulate the oozing but not bleeding. The lesion is later squeeze between the gloved forefingers and thumb to increase the exudate from the lesions.The exudate is applied directly to the microscopic slide for dark field or direct immunofluorescent test.Donovan bodies ( typical intra cytoplasmic organism ) will be identified based on the histological examination of the biopsy or crush preparation.
The organism is difficult to culture.

Treatment of donovanosis ( granuloma inguinale)are doxycycline orally 100mg two times a day for at least 3 weeks until the lesion is completely healed. Next, may include 1g of azithromycin orally once per week, 750 mg ciprofloxacin orally twice a day, 500 mg erythromycin 4 times a day orally and trimethoprim - sulfamethoxazole twice a day one double strength tablet. Treatment is considered for 3 weeks at least until all the lesions are completely healed. Aminoglycosides ( such as 1 mg per kg gentamicin IV every  8 hours  3 times a day ) is considered in cases where improvement cannot be achieved within first few days of therapy. Aminoglycoside is also useful for HIV infected patient.

In pregnant and lactating women, erythromycin should be given. Aminoglycoside addition should also be considered. However , doxycycline, sulfonamides and ciprofloxacin are contraindicated in pregnant women.
Patient should be followed clinically until symptoms and signs are resolved. The process of healing typically begins inward from the margins of the ulcer. Relapse may occur after effective therapy usually 6- 18 months. It is common for failure of treatment and relapse.Anyone who had a sexual contact with a donovanosis patient within 60 days before the onset of symptoms of the patient should be evaluated and offered therapy. 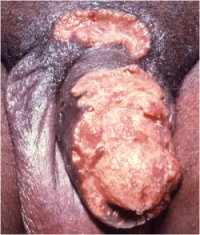