Symptom finder - The causes of hyponatremia and hypernatremia 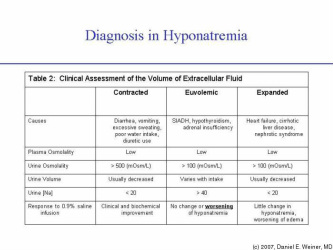 Symptom finder - The causes of hyponatremia and hypernatremia

Patient who suffer from hyponatremia may appear asymptomatic or suffer from headache, nausea, malaise and vomiting. If the sodium level is less than 120 mmol/l , patient is at risk of developing seizures, absent of reflexes, coma or stupor.

Edematous hyponatremia is related to nephrotic syndrome and cardiac failure. Water overload, endocrine disorders and syndrome of inappropriate ADH secretion may lead to hypovolemic hyponatremia. Syndrome of inappropriate ADH secretion occur due to head injuries or tumor which is known as intracranial disease., intake of drug such as carbamazepine and lung disorders such as lung cancer and pneumonia.

Drinking excessive amount of water, intravenous infusions and transurethral resection of the prostate or TURP syndrome may lead to water overload. Endocrine disorders such as Addison’s disease or hypothyroidism may also cause euvolemic hyponatremia.

Hypovolemic hyponatremia may occur due to loss of renal sodium as a result of renal failure, hyperglycemia ( osmotic diuresis) and diuretics. Gastrointestinal losses due to paralytic ileus, obstruction of the small bowel, fistula, vomiting and diarrhea and other causes of loss of sodium such as peritonitis, crush injuries, ascites and burns may lead to hypovolemic hyponatremia.

The investigation required are urea and electrolytes ( reduced in sodium level, raised in potassium level ( Addison’s disease) and raised in urea and creatinine due to renal failure , paired serum and urinary sodium level ( inappropriately concentrated sodium more than 20 mmol/l in urine suggestive of syndrome of inappropriate ADH secretion) and paired serum and urine osmolality( serum hypo osmolality less than 270mOsm/kg and concentrated urine more than 100mOsm/kg suggestive of syndrome of inappropriate ADH secretion.)

Central pontine demyelination may occur as a result of rapid correction of sodium level with intravenous sodium chloride. Rate of correction should be done in a great care. 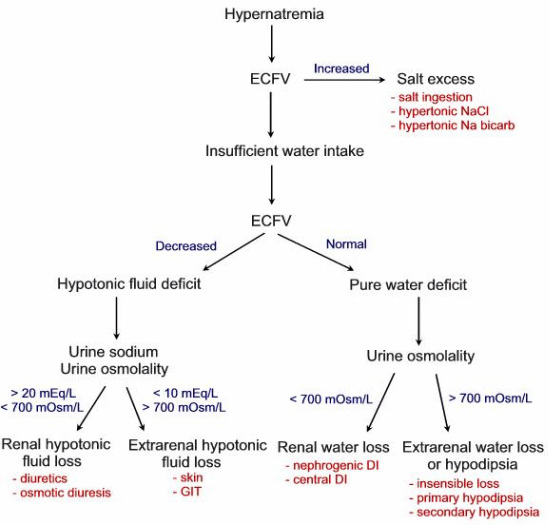 The common cause of hypernatremia is loss of renal water. This occurs due to congenital diabetes insipidus,nephrogenic diabetes insipidus( Bence Jones proteins, lithium, acute tubular necrosis recovery phase and obstructive uropathy post - relief) and hyperglycemia (osmotic diuresis).Excess sodium due to steroid therapy, intravenous sodium therapy, Cushing’s syndrome, cirrhosis of the liver , congestive cardiac failure and Conn’s syndrome( primary hyperaldosteronism) may also cause hypernatremia. Hypernatremia may also occur due to water loss as a result of burns, pyrexia and vomiting or diarrhea due to gastrointestinal loss. Confusion or coma may also cause hypernatremia.