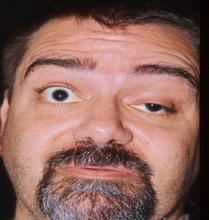 Myasthenia gravis initially present with diplopia or ptosis due to involvement of the extraocular muscle.Other presentations include weakness of the facial muscle and muscle of the extremities which are worsen with fatigue. Myasthenia gravis mostly affect female.

Myasthenia gravis is detected by performing a test with administration of edrophonium.
Edrophonium is a short acting cholinesterase.