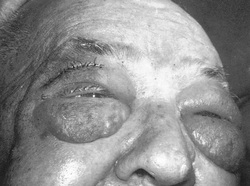 People who suffer from waldenstrom macroglobulinemia may present with signs and symptoms such as anemia, loss of weight, weakness, fatigue, lymphadenopathy, enlargement of the liver and the spleen ( hepatosplenomegaly), bleeding, retinal vascular dilation with impairment of the vision, neurological abnormalities and cold agglutinin disease.